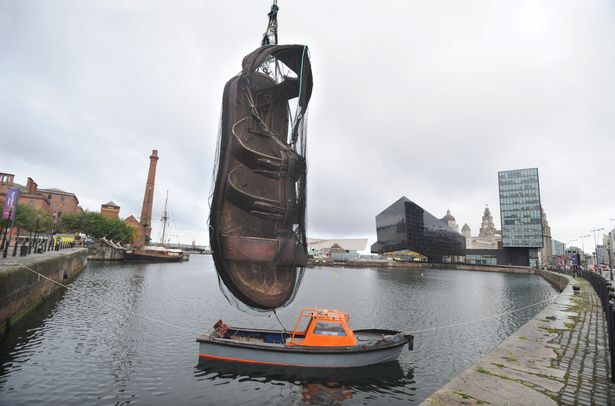 There has been a lot of debate in our house over the last couple of weeks about whether we will get to see more than the three “advertised” giants in Liverpool this weekend.

But I’ve been advocating that, as this is the last ever Giant Spectacular, we will have some big surprises over the weekend. And today’s event’s lead me to think that I am right.

The release of a telegram this morning told us that a giant sandal has appeared in Canning Dock, apparently caught in a fishing net and returned to Liverpool.

Speculation has intensified with the start of Giant Spectacle only 2 days away and Royal De Luxe promising this is the first of many surprises.

My theory is that this is the Little Girl Giant’s father’s sandal, recovered from the seabed by her uncle (who remember first appeared as a deep sea diver) and brought back by him to where he last saw her.

If I’m right then this surely increases the chances of the Little Girl Giant reappearing over the weekend. Her letter, released at the weekend, said that she is at the North Pole and has sent her brother to Liverpool as she says it is impossible for her to join us. But this is Jean-Luc, for who nothing it seems is impossible.

For those of you who haven’t been lucky enough to see the Giants first I’ve pulled together some of my favourite images from 2014 on FullSlidePhotography . I will also be posting images starting tomorrow evening when the Little Boy Giant will be sleeping in St George’s Hall.

An Open Letter to Tom Abell

Dear Tom, It is hard to believe that it is already three weeks since we…

It is time to start considering the impact this new competition (the 16.4) will have on English domestic cricket in 2020.

The Changing Face of Somerset North

It’s Been Too Long

It's my birthday tomorrow - and I'm giving SomersetNorth a present as well!

As a child of the sixties my formative years and some of my earliest childhood memories were of the NASA Apollo missions to the moon. In subsequent years I have…

Beware being in one of my fantasy teams

I am seriously thinking about giving up playing fantasy football and cricket. judging by the injuries suffered by my players in the last week.

The loneliness of a (not so) long distance runner

Many years ago I thought it would be a good idea, at the end of the cricket season, to run a half-marathon. It went reasonably well and I decided to…

I Am Now A Podcaster!

Following on from my writing debut for The Anfield Wrap last month I have now made my debut as a podcaster.